It is known that Bronzino was a pupil of Pontormo, and in his formative years he was content to base his style on his master’s art; this derivative tendency can be seen in the Washington Holy Family, significantly attributed to Pontormo in earlier times. 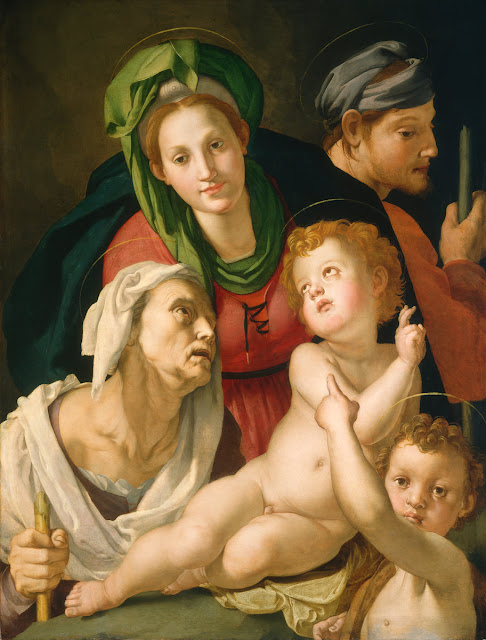 Then there are Bronzino’s portraits where his artistic personality begins to emerge. Though these famous portraits of haughty aristocrats contain something of the Pontormo blueprint, there are signs that the pupil has begun to evolve his own style in response to his researches into Pontormo and the mannerist godfather- Michelangelo. The Ugolino Martelli (Berlin) and Portrait of a Young Man (New York) rely upon cursive draughtsmanship associated with Pontormo; but the contrapposto suggests Michelangelo’s figures. As Freedberg points out, Bronzino’s art depends upon a recipe that unites sharp delineation, an eye for the objective reality of details and a pervasive aesthetic sense. His art is sophisticated, but knowingly refined as if the artist is sharing a secret with those in the know. 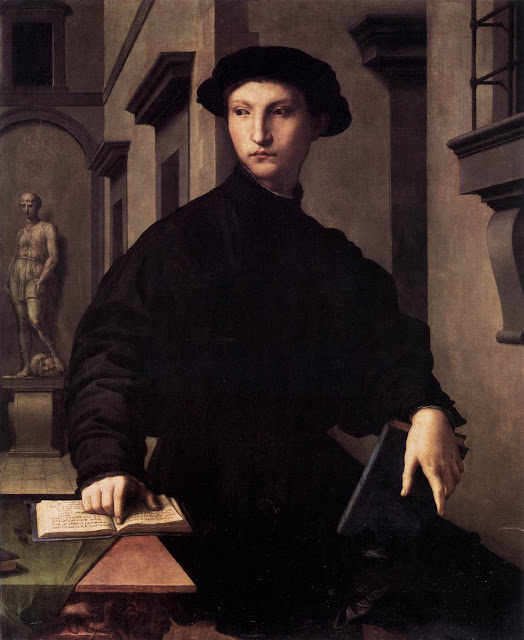 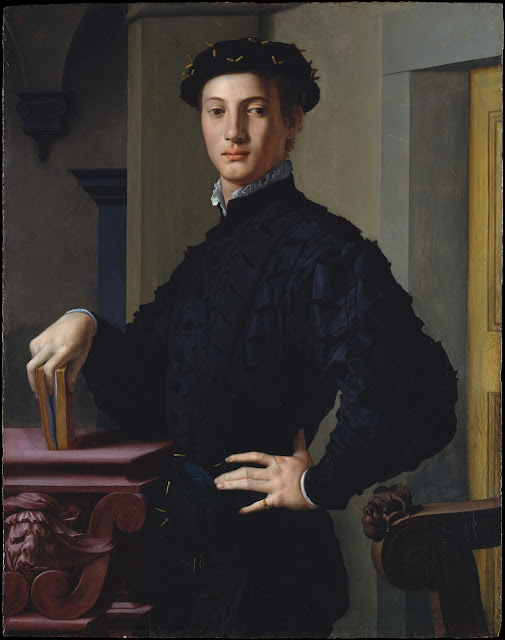 Bronzino’s researches into the “high maniera” culminate in his Pietà where Michelangelo’s earlier version is re-invented as a cold, frozen mask of beauty that inspires aesthetic contemplation rather than religious devotion. And in the canonical Allegory in the National Gallery, Bronzino seems to have petrified art as if to keep it away from human experience and emotions. 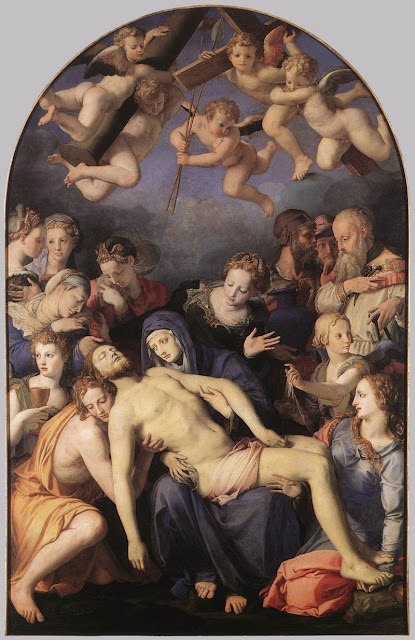 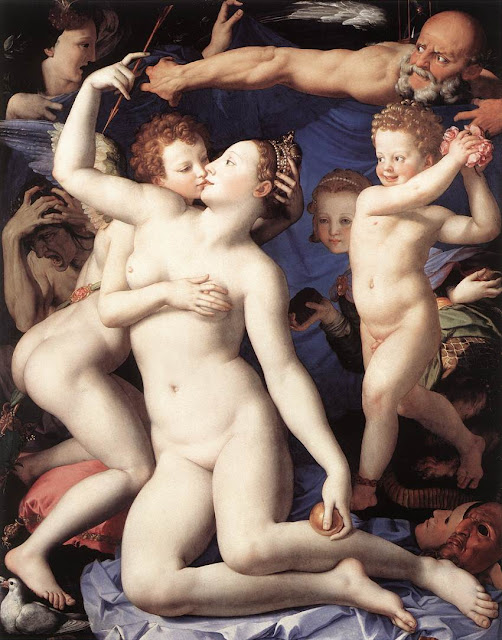 Unsurprisingly Bronzino had many acolytes who though originating in non-maniera spaces eventually succumbed to its style, perhaps envisaging it as the new Florentine mode par excellence. Bronzino’s closest pupil, Allesandro Allori, faithfully adhered to his master’s stylized use of Michelangelo, as can be seen in his Pearl Fishers. This painting extracts motifs from various Michelangelo-esque sources like the The Deluge and Cascina Cartoon, not to mention the canon of classical sculpture. 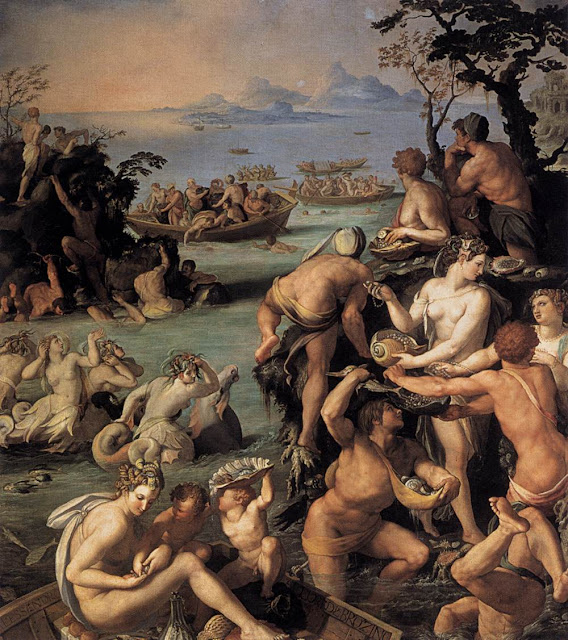 Another one of Bronzino’s heirs, Giovanni Battista Naldini, had an ambivalent attitude towards maniera; initially he embraced it through Bronzino and Vasari; but subsequently reached back towards Sarto through Pontormo (his first master) and the initial phase of the maniera. Strong sfumato with a painterly brush shows a lack of sympathy with the pronounced graphic tendency of mannerism; moreover sfumato suffuses Naldini’s paintings with emotion, which, for Freedberg, places him halfway between Andrea del Sarto and Barocci, subject of a current exhibition in London. 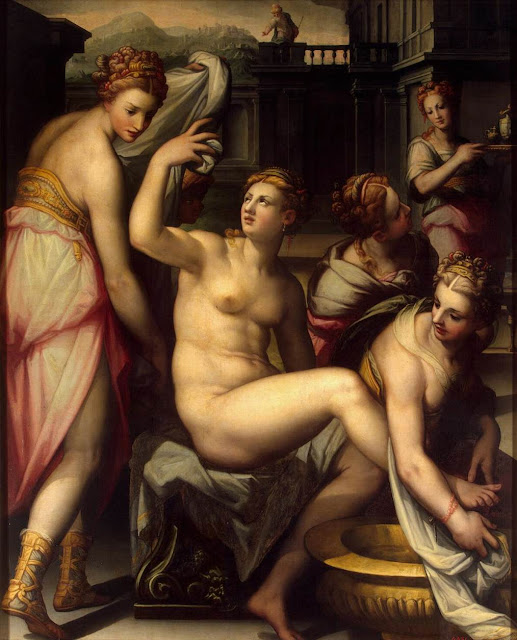 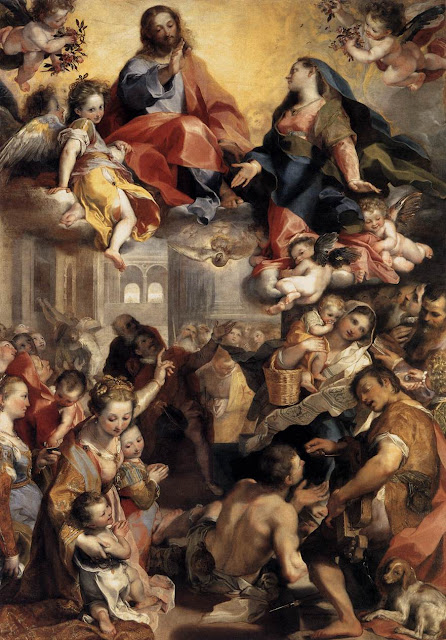 Some might argue that the endgame of mannerism is all about a struggle between naturalism and the intense artifice that characterised the style. Well before the Florentine reformers –see below- the obscure Mirabella Cavalori was using light in a realistic way in his genre scenes. If it were not for the strange Pontormo-esque forms and abrupt spatial shifts, his Wool Factory could remind us of the realist painters of the next century, like the Carracci and Velasquez. 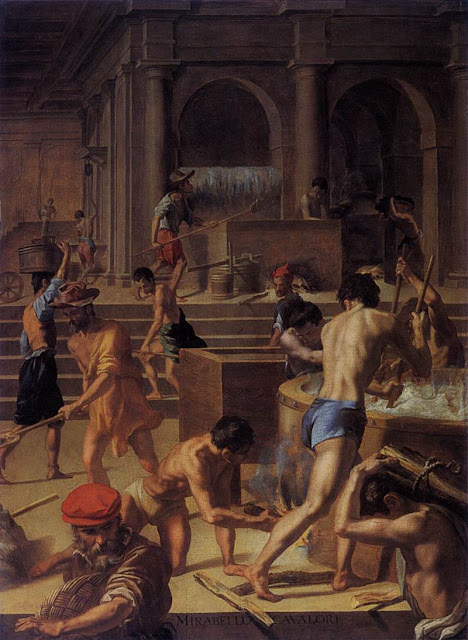